Larry Hite is regarded as one of the forefathers of systems trading. He grew up as a dyslexic, partially blind kid, facing failure and struggle at every corner. Despite such background, he went on to found and manage, Mint Investment Management Company which at its time became one of the most profitable and largest quantitative hedge funds in the world. In 1990, Jack Schwager profiled Larry in bestselling book, Market Wizards.
Recently he authored a book The Rule: How I beat the odds in the Markets and in Life-and How you can too. 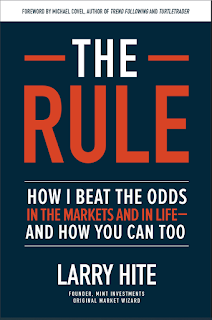 Based on Larry’s experience in running trend following strategies successfully, he makes it clear that

Popular posts from this blog

October 18, 2020
Warren Buffett needs no introduction. He has outperformed the market for a very very long time and has become one of the richest people in the world. He doesn't keep any secrets either. All his advice and strategy is out in the open for you to follow it. But while he has made his fortune through value investing, he acknowledges that value investing aka as stock picking is not for everyone. In fact he encourages investing in low cost index funds. He wrote in the 2016 annual shareholder letter My regular recommendation has been a low-cost S&P 500 index fund He had publicly stated in 2006 itself that he is willing to bet $500,000 that over a period of ten years, an S&P Index Fund would outperform a collection of hedge funds. An index fund is a no brainer. Instead of picking individual stocks and trying to outperform the market, indexing is based on the premise that just buy the whole market. It mirrors the performance of the market. It is also low cost as it charges only
Post a Comment
Read more