October 18, 2020
Warren Buffett needs no introduction. He has outperformed the market for a very very long time and has become one of the richest people in the world. He doesn't keep any secrets either. All his advice and strategy is out in the open for you to follow it. But while he has made his fortune through value investing, he acknowledges that value investing aka as stock picking is not for everyone. In fact he encourages investing in low cost index funds. He wrote in the 2016 annual shareholder letter

He had publicly stated in 2006 itself that he is willing to bet $500,000 that over a period of ten years, an S&P Index Fund would outperform a collection of hedge funds.

An index fund is a no brainer. Instead of picking individual stocks and trying to outperform the market, indexing is based on the premise that just buy the whole market. It mirrors the performance of the market. It is also low cost as it charges only a very small annual fee. After all there is no brain power involved to command fees. All that is needed is to copy the changes in market index.

Hedge funds on the other end is an epitome of active investing. Hedge funds typically employ the best and brightest minds in finance. They have hundreds of analysts and traders working for them. They can also employ various strategies, including going short on the market. Hence the name hedge fund. No Wonder they command very high fees for all this brainy activities. Usual is "2 and 20”, meaning 2% management fee and 20% performance fee (i.e., they take 20% of realized profits).

For several months, no one responded to his challenge. But towards the end of 2007, Ted Seides of Protégé Partners accepted his challenge and this is how the bet was worded

Over a ten-year period commencing on January 1, 2008, and ending on December 31, 2017, the S&P 500 will outperform a portfolio of funds of hedge funds, when performance is measured on a basis net of fees, costs and expenses.

Now hedge funds are also managed by humans and it helps to diversify. So instead of putting all his eggs in one basket, Ted Seides created a diversified basket of 5 hedge funds, with five different strategies (quant trading, long-short, macro, etc.) Buffett later wrote in his annual shareholder letter

Essentially, Protégé, an advisory firm that knew its way around Wall Street, selected five investment experts who, in turn, employed several hundred other investment experts, each managing his or her own hedge fund. This assemblage was an elite crew, loaded with brains, adrenaline and confidence. The managers of the five funds-of-funds possessed a further advantage: They could – and did – rearrange their portfolios of hedge funds during the ten years, investing with new “stars” while exiting their positions in hedge funds whose managers had lost their touch. 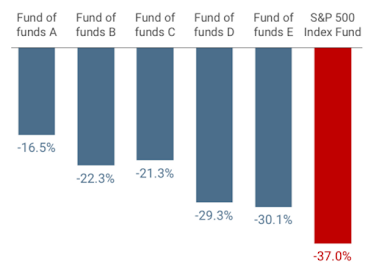 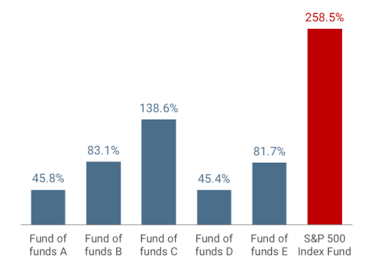 However the market recovered in 2009 and ended up positive in all the subsequent years. The hedge fund managers were in their quest to beat the market, going in and out of their positions, amplifying returns using leverage etc. and in doing so, they made many mistakes. The end result: they all strongly underperformed the market.

The lessons are not hard to guess

Warren and Ted each funded their $500,000 portion by purchasing $500,000 face amount of zero-coupon U.S. Treasury bonds, costing each of them $318,250 – with the $500,000 payable in ten years. These bonds implied 4.56% interest if held to maturity. That was supposed to be lower than the S&P returns over the next 10 years and also the hedge fund returns. But within 5 years, the bonds had achieved ~95% of their maturity value due to fluctuation in price of bonds on account of changes in interest rates and other factors. Both realized that there was no point holding the bonds for another 5 years for the remaining 5% of gains to make it 1 million. So the bonds were sold and 11,200 Berkshire shares were bought in 2012, with the understanding that if there is any shortfall, Warren will make up the difference so that final maturity value is 1 million USD. By end 2017, those Berkshire shares were valued at $2,222,279, far more than the original target of 1 million dollars. The CAGR over the 10 years was ~21%! Compared to ~8% of S&P and less than 3% of the hedge funds basket. 21%+ CAGR was achieved with just 2 decisions over 10 years and doing nothing in between.

Popular posts from this blog

May 22, 2020
Larry Hite is regarded as one of the forefathers of systems trading. He grew up as a dyslexic, partially blind kid, facing failure and struggle at every corner. Despite such background, he went on to found and manage, Mint Investment Management Company which at its time became one of the most profitable and largest quantitative hedge funds in the world. In 1990, Jack Schwager profiled Larry in bestselling book, Market Wizards. Recently he authored a book The Rule: How I beat the odds in the Markets and in Life-and How you can too. It is a fascinating account of someone embracing his fears, frustrations, self-doubt and how this led him to accepting markets as they are. In fact, his familiarity with failure helped him manage risks better and become successful in markets. There are some key lessons we can imbibe from his life and his market successes. Read on. Create a system that you can put on auto pilot At one time, due to an error of judgement made by his investing par
Post a Comment
Read more